There are also spaces for the Tleilaxu Tanks and Spice bank, as well as a handy turn and phase counter.

Two rulebooks come with the game. A quick start guide, which acts as both a reference and easy entry point. And the complete rules, for both the basic and advanced version of the game.

There are six faction specific reference cards included with DUNE. These give each player an easy way to see any special rules their faction has as well as their starting resources. 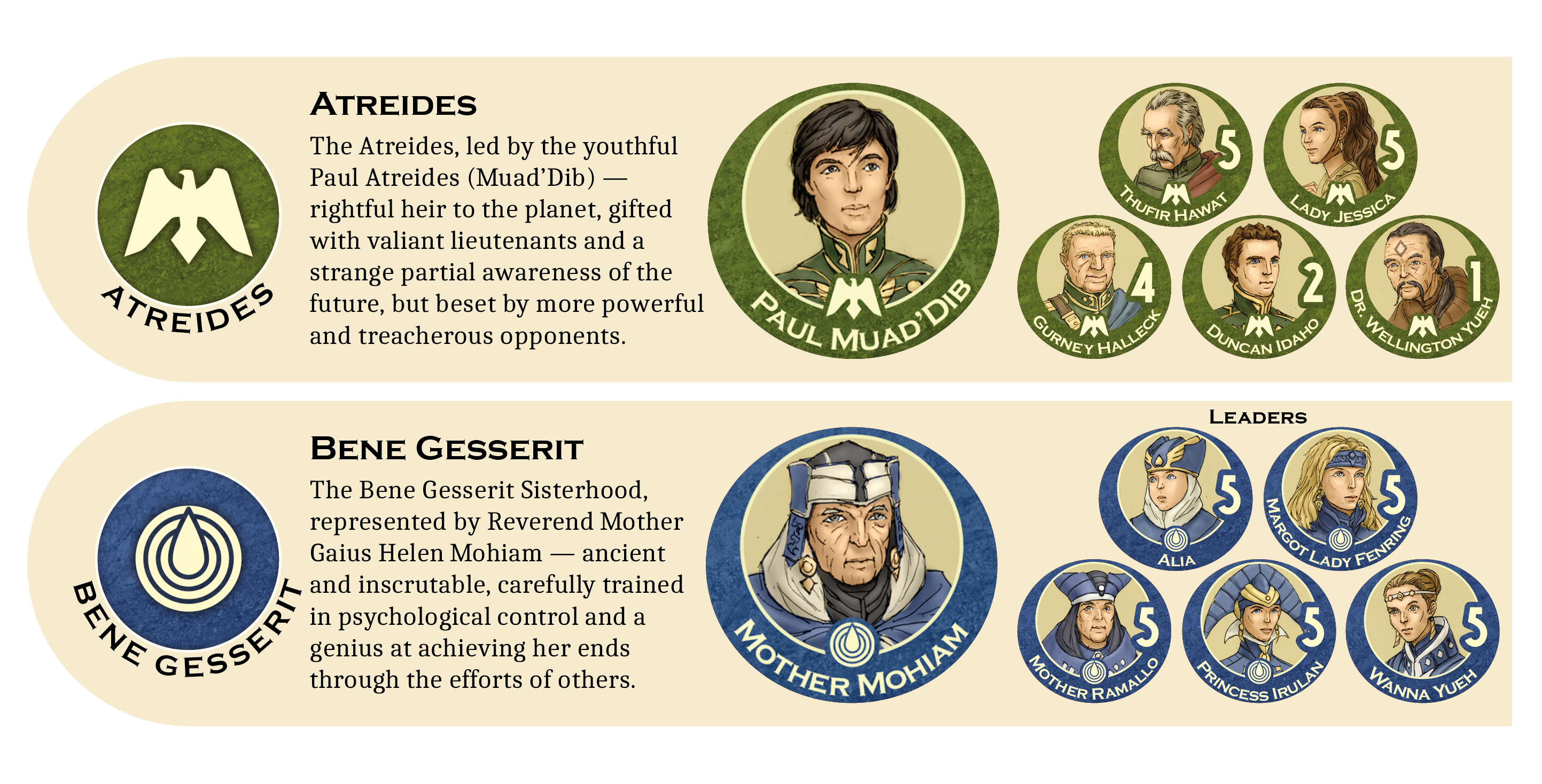 The box also contains six faction screens. To keep your secrets (and your spice!) hidden away from prying eyes. 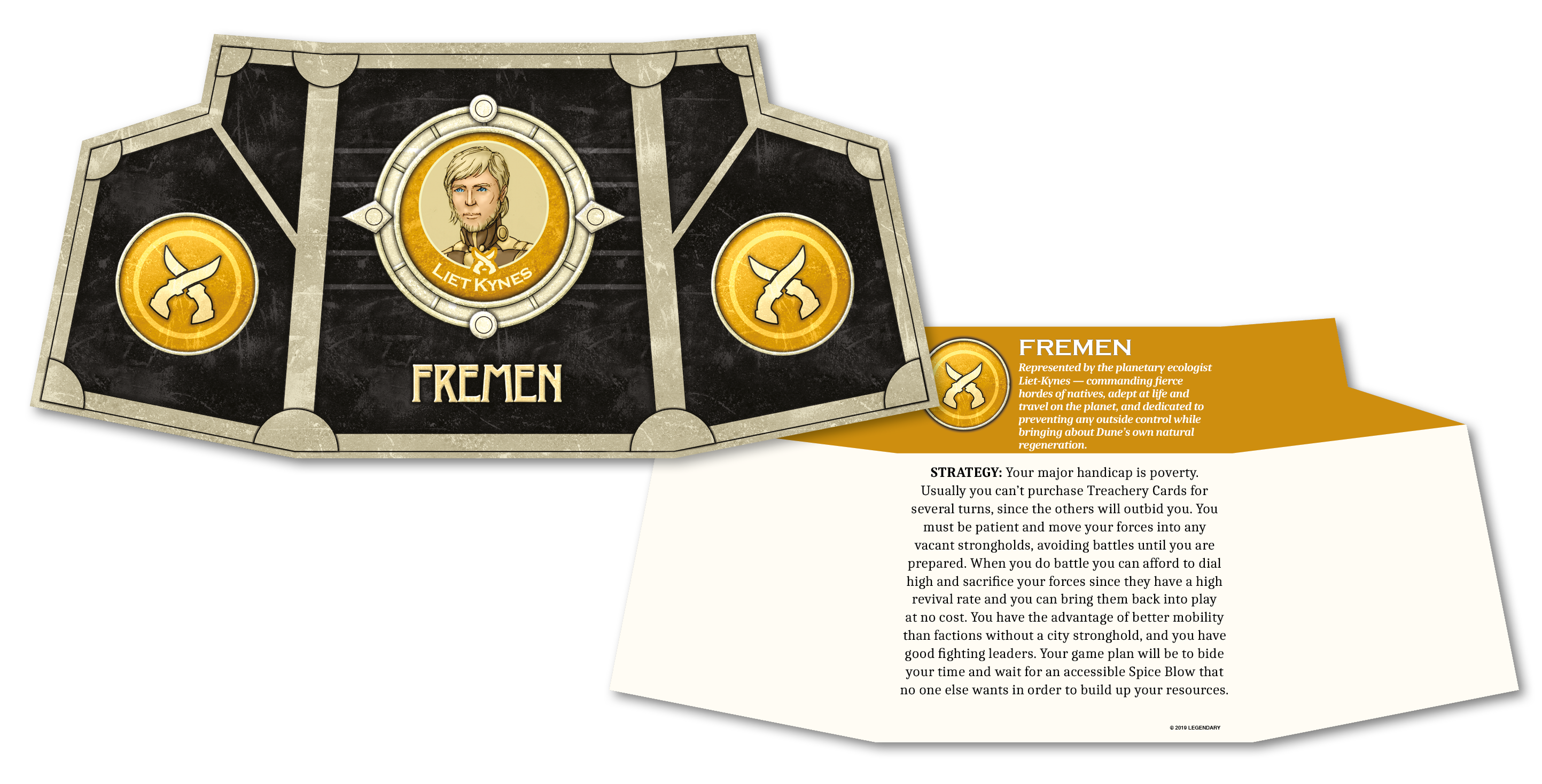 A key part of DUNE is managing your leaders as you fight across Arrakis. Each faction has five unique leaders for a total of 30 leader tokens. These leaders are characters from the book itself and fans will recognise many familiar faces 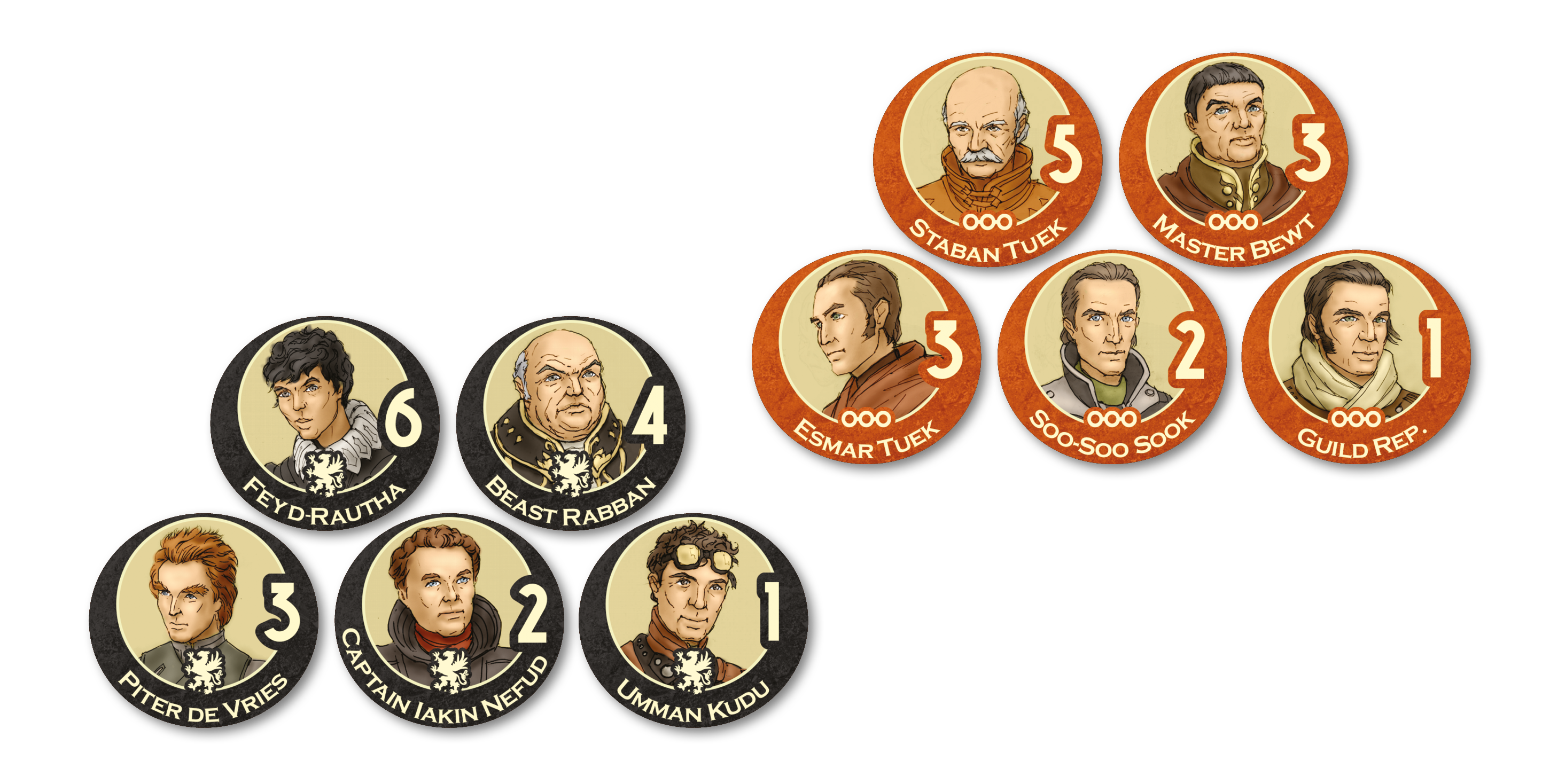 And where would your leaders be without troops to command? Each faction has X troop token for a total of X troops that can be all fighting across the desert to the next Spice blow.

Some factions have special troop tokens that play a part in the advanced version of the game, such as the Bene Gesserit Advisors or the Emperor’s elite Sardaukar troops.

DUNE is a game of diplomacy, betrayal… and conquest. In the box you will find two battle wheels, these are used for resolving combat between players as well as determining the movement of the always threatening storm. 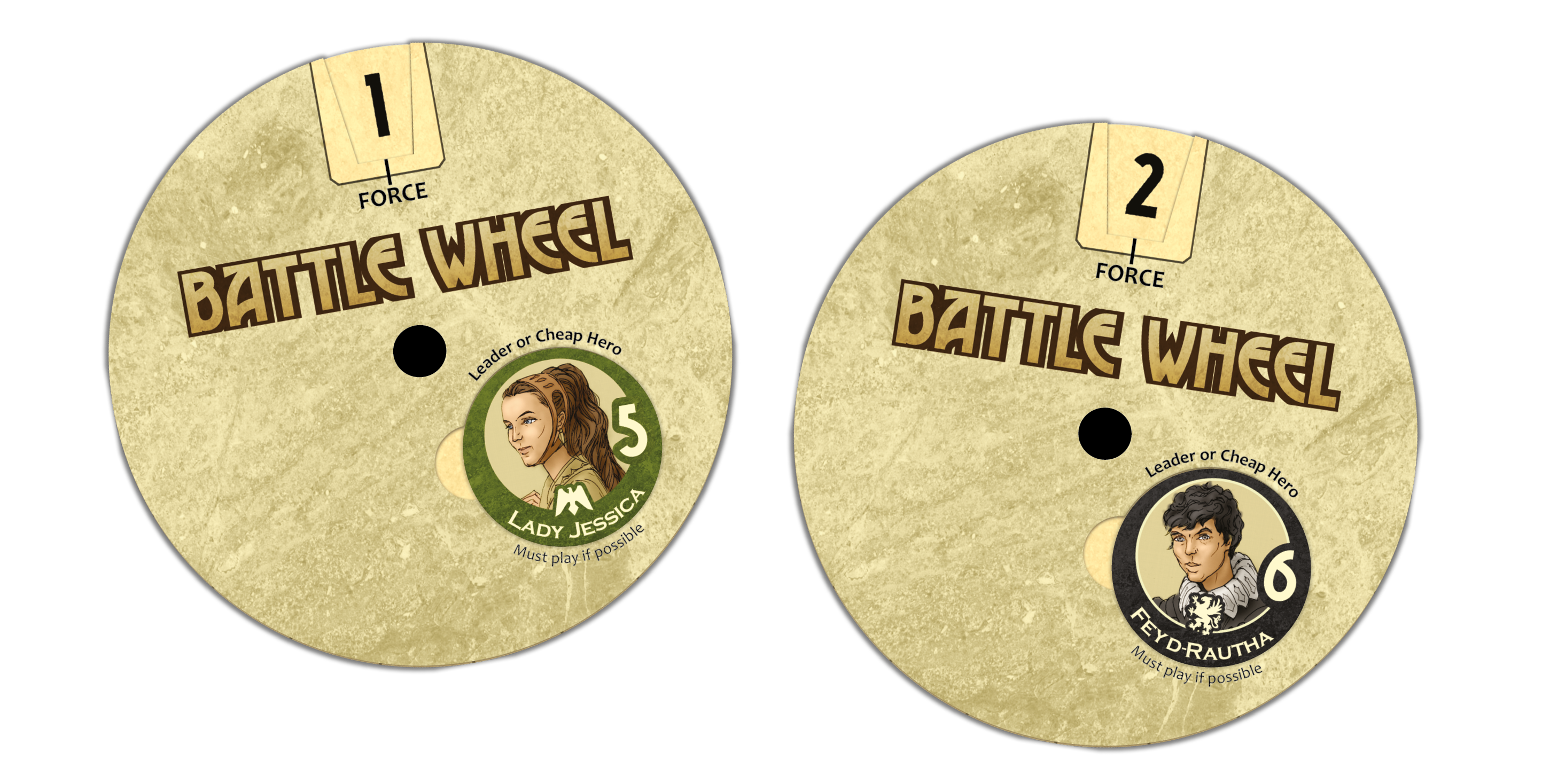 You will also find a number of special tokens including, the storm, a turn marker, the destroyed shield wall, the pieces representing the prophesied kwisatz haderach, and of course the mighty Shai-Hulud, the sand worm.

The box includes a number of different card decks to pull from. Some are faction specific, such as the Bene Gesserit prophecy cards, and the House Atreides kwisatz haderach tracker.

Others are for all players to draw from such as the treachery and traitor decks. While the storm and spice blow decks determine in game events. Finally the alliance deck acts as a reference and reminder of who your friends are. 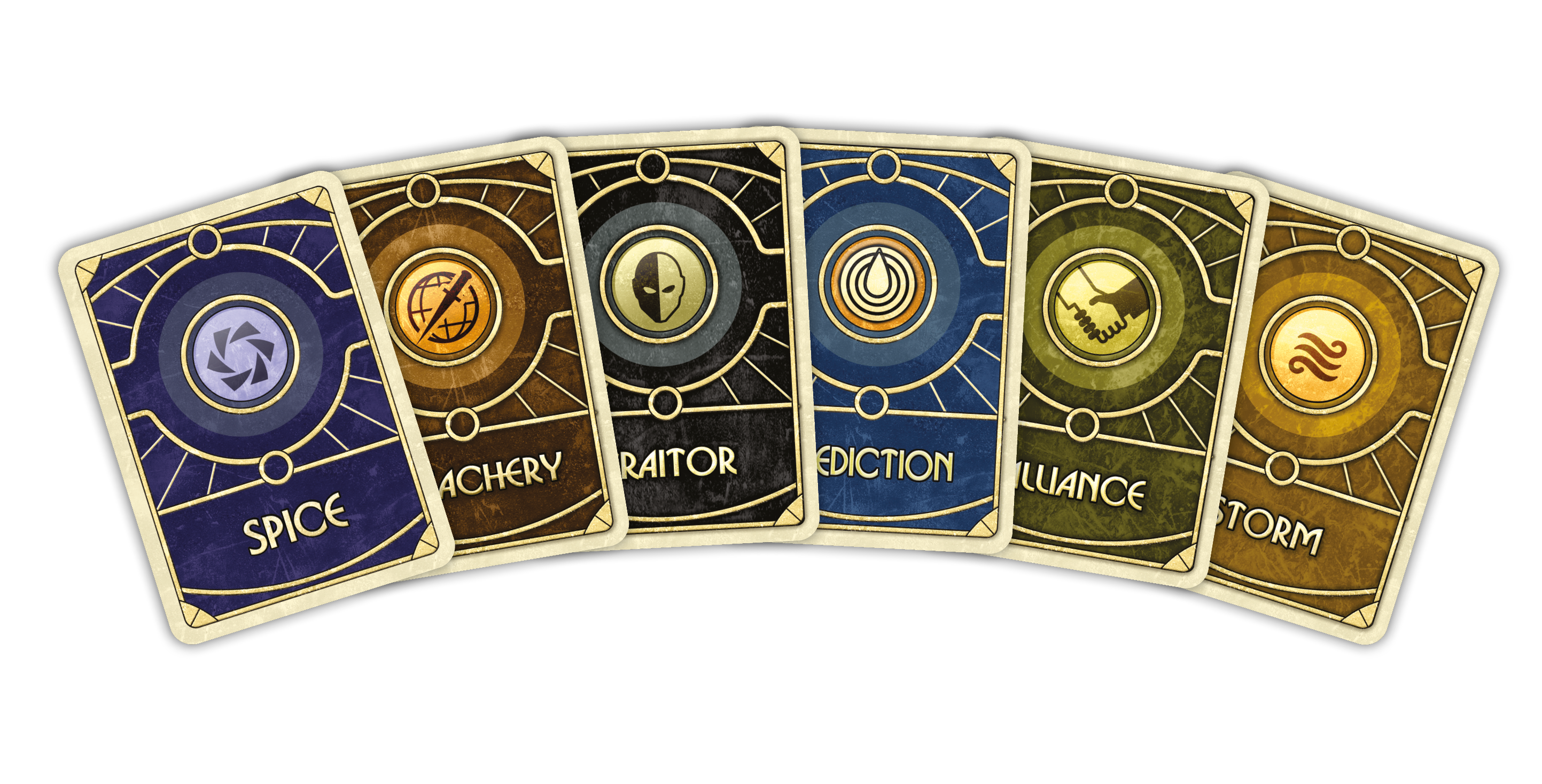 Finally, of course, there are 144 spice tokens to fight over included in the box. The most valuable substance in the universe and the ultimate reason so many factions have converged on Dune!

“All fades before melange. A handful of spice will buy a home on Tupile. It cannot be manufactured, it must be mined on Arrakis. It is unique.” – Duke Lete Atriedes 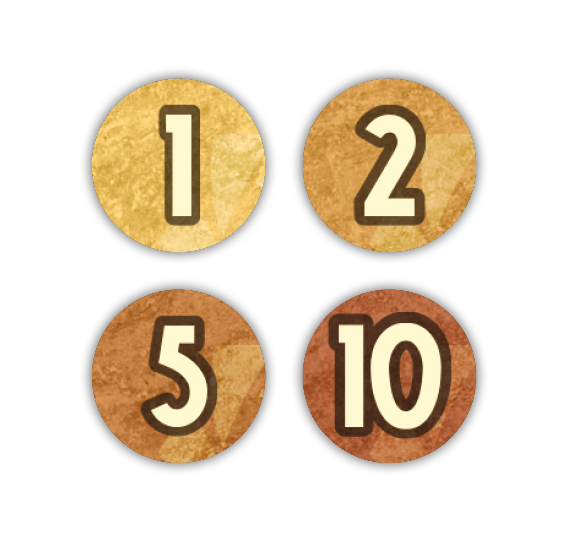 Check out the unboxing video below, for more information…