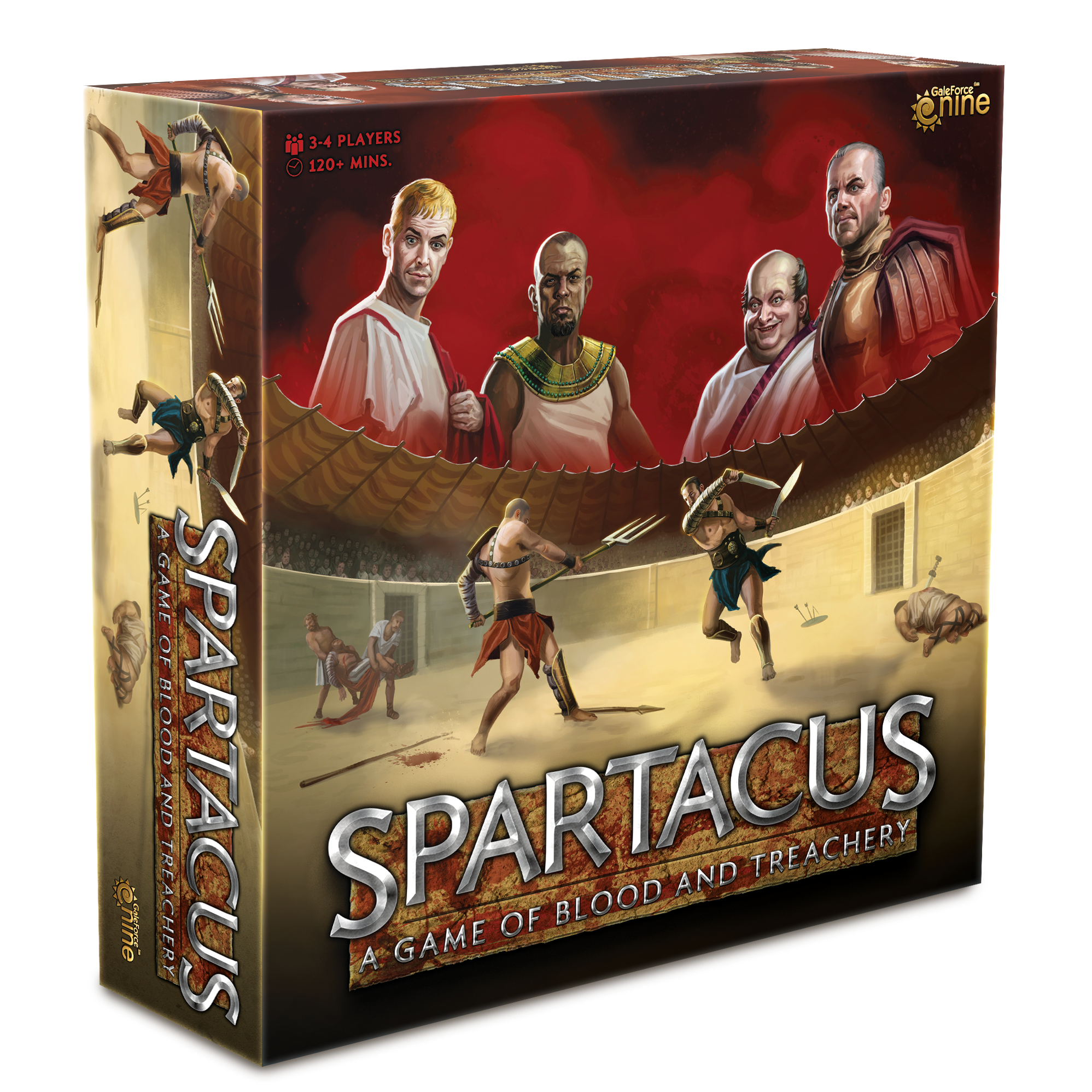 Spartacus: A Game of Blood and Treachery is an exciting board game of twisted schemes and bloody combats. In the game you are the Dominus, leading a rising House in the ancient Roman city of Capua, competing for Influence to gain the favor of Rome. Through a combination of political schemes and glorious battles on the arena sands, your house will rise or fall in fame and stature.

As Dominus, you have a variety of resources at your disposal. Your growing Influence allows you to hatch devious plots against competing Houses, but some of the most cunning intrigues may require the cooperation or coercion of a bitter rival. From your treasury you pay to upkeep your ludus, purchase new servants at market or fill the purse of another Dominus when bribes are required. The servants of your House are at your beck and call. Guards may protect you from schemes launched by your rivals. Slaves run your household and earn gold for your treasury. Gladiators compete in the arena, bringing glory to themselves and influence to their Dominus.

Power and Influence are fleeting, just when you think you have deceived your rivals and bled Capua dry, the schemes of your foes could topple your House and crush your ambitions.  Do you have the wits, the cunning and the power of your gladiators to write your own legend in Spartacus: A Game of Blood & Treachery?

Three main phases occur in each game turn of Spartacus: A Game of Blood & Treachery after a simple upkeep phase.

Before each round begins players handle the affairs of their ludus.  First, all uninjured Asset cards are returned to the Ready condition.  Then, see to your injured servants and champions; will they succumb to their wounds, languish for another turn or return to your service?  Finally, you must balance your ledgers, collecting the wealth your household earns while also paying for the training and upkeep of your Gladiators.

As Dominus, put your Schemes in motion during the Intrigue Phase; raise your fortunes and Influence while undermining your rivals. Schemes and Reactions are represented by cards in the Intrigue Deck. Wield your Influence to put Schemes into play, often conspiring with another player on the most complex plots.  If help is not freely given, a clever Dominus may resort to bribery or blackmail to secure cooperation.  In the end, even your cleverest scheme may be foiled by a quick Reaction or an alert Guard.

The Market Phase is when you buy, sell, and trade Assets (Gladiators, Slaves, and Guards). After trading on the Open Market, the Auction begins; bid against your rivals to acquire new Assets for your House. Wealth is not your only path to success as you bluff and bargain with other players to acquire the Assets you covet.  Finally, Houses bid against one another to see who will have the critical prestige of hosting the turn’s gladiatorial games.

The Arena Phase is when the bloody games are held. Gladiators from two rival Houses are pitted against each other in a brutal fight for glory at the invitation of the Host. The spectacles of the games are represented by miniature combat on the arena board. Fighters pit their Attack, Defense and Speed dice against one another to determine the victor. All players seek to increase their fortunes by betting on the outcome of the gruesome conflict. Fighters who emerge from the arena victorious gain Favor and their Dominus will gain Influence.  Losers are subject to the bloodthirsty whims of the crowd and the judgment of the Host.

The goal of Spartacus is to become the most influential House in Capua, securing your family’s power for years to come. During the game, players will bribe, poison, betray, steal, blackmail, and undermine each other. Gold will change hands, again and again, to buy support, stay someone’s hand, or influence their decisions. Will you be the honorable player whose word is their bond or the treacherous schemer whose alliances change with the wind?  Dare to enter the treacherous and bloody world of Spartacus: A Game of Blood and Treachery and see ambition fulfilled!

AN INTRODUCTION TO THE HOUSES

In Spartacus: A Game of Blood and Treachery, you are the Dominus of one of four Houses in ancient Capua.  Households are plotting to increase their Influence and gain the favor of Rome.  Each House has its strengths and weaknesses.  Some Houses rely on their Gladiators to lead them to victory.  Other Houses depend on a strong defense.  Utilizing your strengths is key to victory.

The House of Batiatus is celebrated for its remarkable ludus of Gladiators. Depend on the hardiness and prowess of your ludus to increase your Influence. Obtaining conquest in the arena is the fastest means to gain power, but mind your treasury for the upkeep and preparation of Gladiators will be a strain on your coffers. While Gladiators fight for dominance, see ambition rewarded by scheming to destabilize your rivals.

Controlling commerce and trade in Capua is House Tullius, an esteemed House with an abundance of slaves. As Dominus, you have eyes and ears all over the city, allowing your many schemes aimed at your rivals to take root. However, a businessman’s influence only goes so far, true fame is sought on the revered sands of the arena and with your chosen champion you will see your status elevated.

House Glaber’s ambition is a fearsome thing to behold. Having risen to the status of Legatus, the military might you’ve obtained safeguards you from the schemes of your adversary’s, however, this is not enough to seize the power and influence you so desire. Before bringing your rivals to their knees and taking your rightful place, you must use the resources at your disposal to concur the arena, and, weaken the plots of your enemies.

House Chuma knows there is more than one true path to power. Schemes and Slaves, Guards, and Gladiators, all have their usefulness when applied properly. House Chuma’s rise to power will be built upon the back of broken deals, and shattered friendships. Gain influence over those who consider themselves your better, for there can be no sweeter vengeance than victory.