Starfinder: Pirates of Skydock tells the story of several Starfinder adventurers trying to seize a new vessel. Players must accomplish several tasks to steal the ship. Doing so will require a combination of glory, crew support, and potentially external backers. The adventurers can work together to accomplish their goals, but only the character with the greatest glory will win the bet and become captain. Of course, if security gets too high, the ship will lock down and no character will become captain.

The game is played over several rounds. Each round is made up of the following phases:
1. Planning Phase
2. Action Phase
3. Upkeep Phase

In the Planning phase, you can take the following 3 actions in any order:

Draw any combination of Loot or Scheme cards.

The Action Phase is where players perform actions in an attempt to steal the ship and gain Glory or Support. Play begins with the first player and continues clockwise around the table. When it is a player’s turn, they remove an Energy Marker from their Character Board and take the corresponding action underneath that Energy Marker. The current active player also has the option of playing Loot cards for their text ability, or to acquire/upgrade their Character Ability. 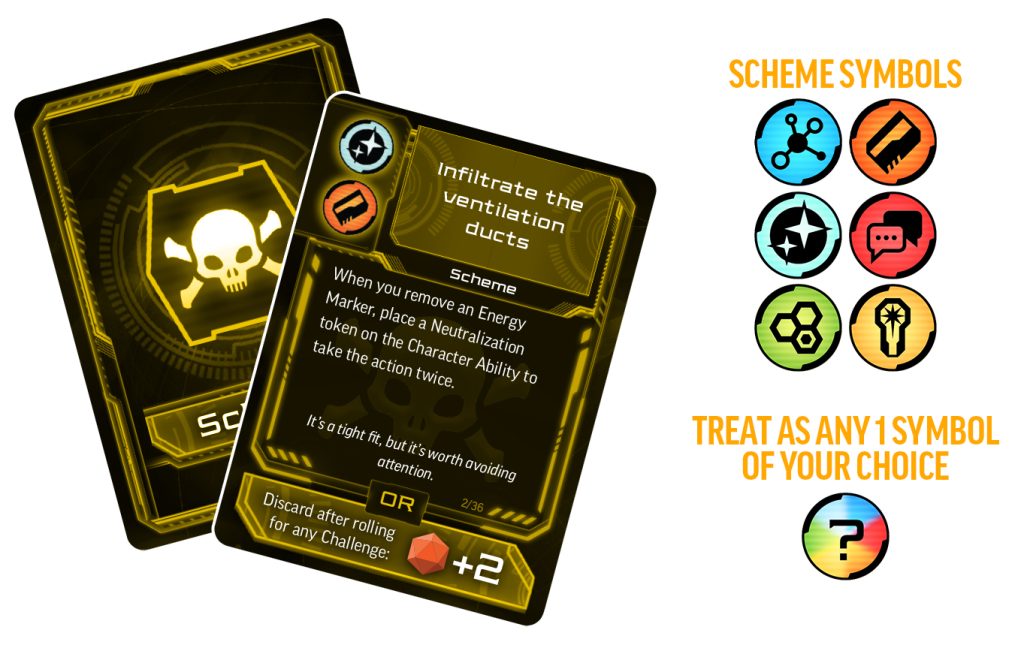 Another important feature of the Action Phase is being able to traverse the ship. Moving between rooms and Interacting with objects is how you will go about finding Loot. But there will be challenges along the way, such as Guards and random encounters.

Some care is needed, as these actions can increase the Alert Level which can make future exploration more difficult. If the Alert Level ever reaches LOCKDOWN, the game ends and all players lose. 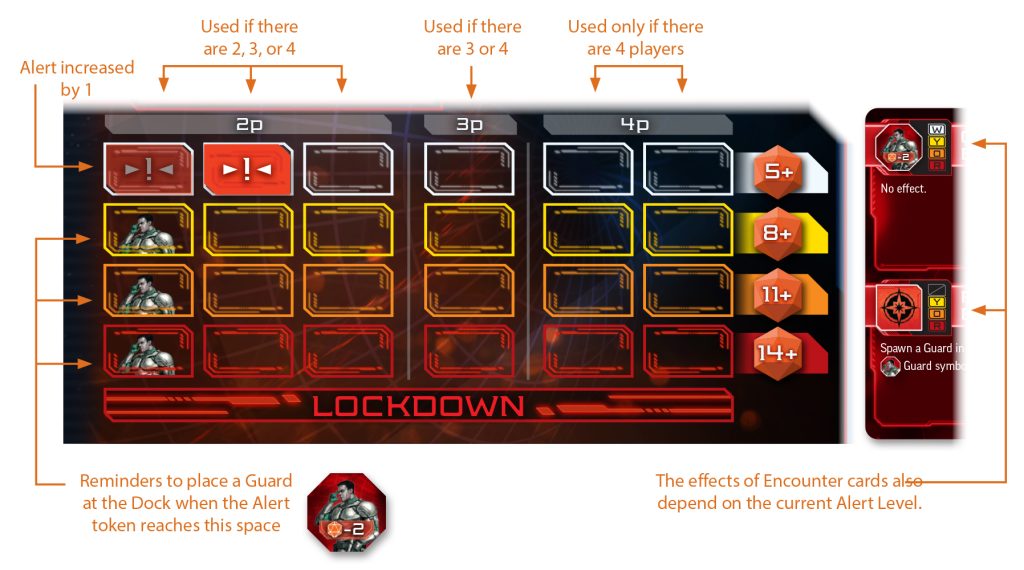 The phase ends when every player has no Energy Markers left to remove, and moves to the Upkeep Phase.

Upkeep is performed in this order:

1. Discard to 5 cards: Any character who has too many Loot or Scheme cards must discard down to their hand limit. The default hand limit is a combination of 5 total Loot and Scheme cards.

2. Launch Track: Move the Launch token one space closer to Launch. If it has reached the final space, the game ends. Skip the rest of the Upkeep Phase.

3. First Player: If the First Player token is not claimed, rotate it one spot clockwise. If it is claimed, flip it to the unclaimed side.

Each active Guard token that is not in a room with a character will move to the next room following the arrows on the Game Board.

Any rooms with a -2 and at least one Character standee gain a Guard token.

Increase the Alert token 1 space for each character that is in the same room as a Guard token.

Each character in a room with at least one active Guard token must pass a Challenge or gain a Neutralization token. Don’t forget the –2 Penalty per Guard token present.

Flip each stunned Guard token to its active side.

Remove any Neutralization tokens with the Recovering side face-up.

Flip any Neutralization tokens from the Assigned side to the Recovering side.

After finishing these steps, a new round begins and the Planning Phase commences.

To win, each player will need to complete at least one objective before the ship is put into Lockdown. When the ship launches, the player with the most Glory and Support will be declared captain and win the game!