“We can live on this world as we choose, making our own lives and future.  We shall never be slaves again!  From this day forward we shall call ourselves the Free Men of Arrakis”

You all know the story of Dune, the squabbles of the noble houses over control of the Spice Melange…  ARRAKIS: Dawn of the Fremen is set more than 100 generations before the Atreides came to Arrakis…

ARRAKIS: Dawn of the Fremen focuses on the hard choices Fremen leaders made when bargaining, cooperating, and competing in the harsh Arrakis environment to gain and protect scarce resources and to create the communal cave dwellings they called sietches.

In ARRAKIS: Dawn of the Fremen, each warrior represents a highly organised squad of a tribe’s male and female warriors.  The resources needed to survive are simple: Food hunted and gathered wherever it can be found, water collected in wind traps from dew each morning and the leavings of the gigantic sand worms: the spice melange deposited by mysterious spice blows and the hard teeth from which crysknives are fashioned. 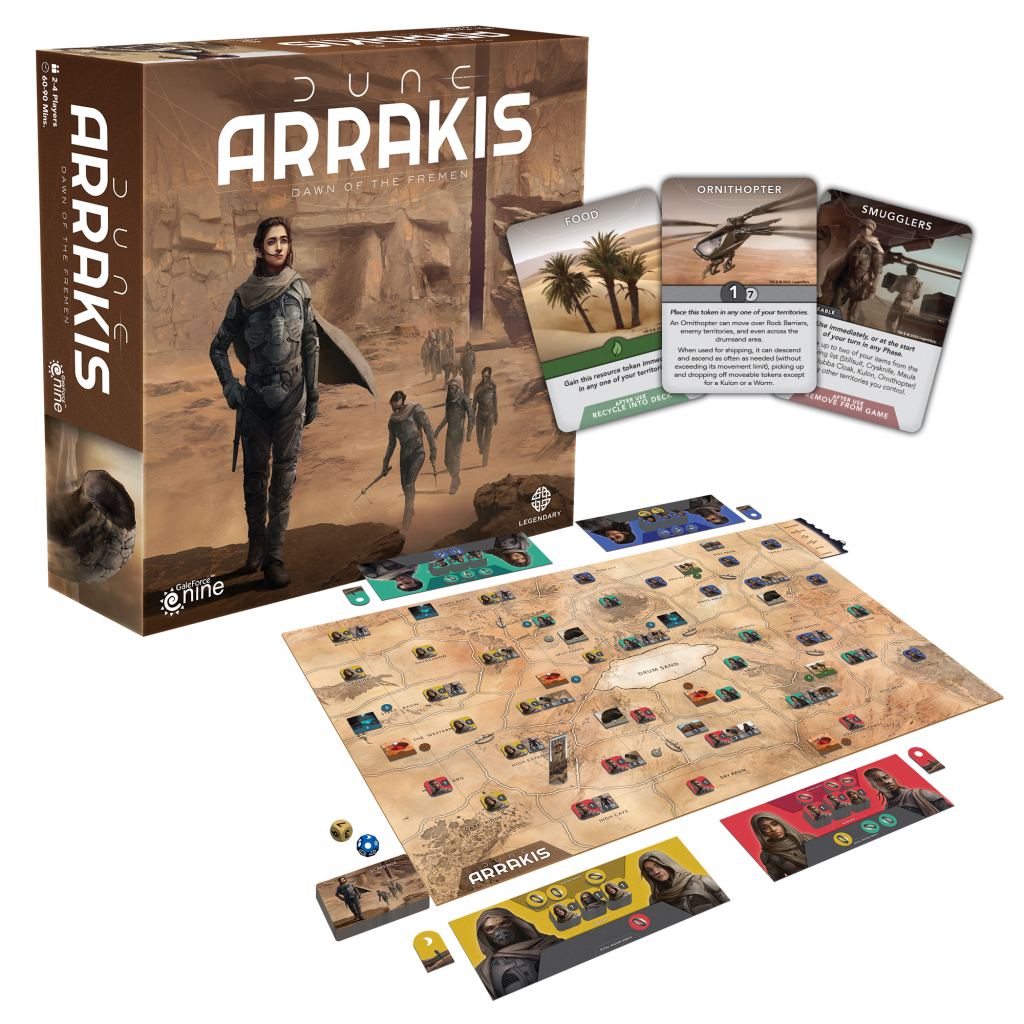 To begin the set-up of the game, The Harj Leader will roll the Order Die. This roll will determine the number of Rock Barriers that are include in the game. These Rock Barriers will then be placed onto the board on any boundary between 2 territories. From there, players will start placing Resource Production Sites totalling up to 12, followed by player territories which the player will occupy with their Fremen Warriors. These actions are all taken with the Harj Leader making the first move, followed by the other players in a counter-clockwise order.  At the end of the Harj, opportunities are created that will shape your experience of the cruel realities of existence on this arid planet.  Remember… Only the strongest will survive… 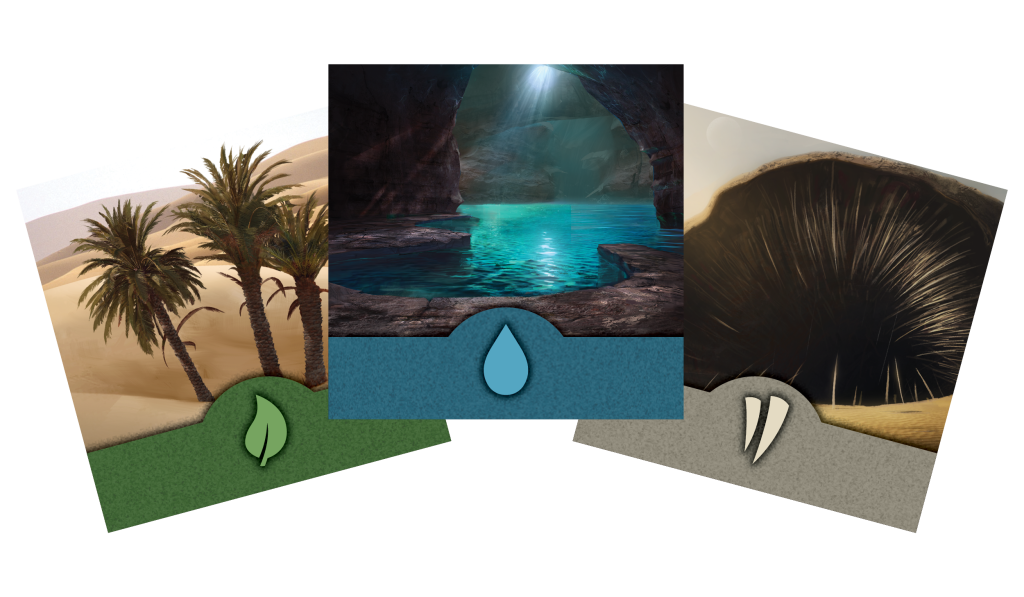 After Harj the game is played in Cycles. Each Cycle is divided into 6 phases. The first Cycle, the Initiation Cycle, has special rules that make its phases somewhat different from the phases in the remaining Cycles.
The fate of the Production, Trade, and Shipment Phases is determined by the Arrakis Die. There is a possibility that these phases may not occur, or have special rules.

The Phase that takes place is determined by which face the Arrakis Die lands on. The Production, Trade, and Shipment Phases on the Phase Tracker have a symbol to remind you to roll the Arrakis Die.

The Six Phases are as follows: Development allows for the spending of Resources to build Stillsuits, Crysknives, and Sietches which offer special bonuses.

Production allows for the generation of Resources on tiles that your Fremen warriors currently occupy.

Trade allows players to offer an equal one-to-one trade of any resource they currently posses.

Shipment allows players to make a single shipment, shipping moveable tokens starting from, moving through, and ending in territories they control. All Resource tokens and all Development tokens except for Sietches are movable during Shipment. Warriors are not

Council occurs at the end of the cycle, and allows for players to pause and evaluate the game.

Discussions and decisions during this phase escalate as the game progresses.

Expanding upon the Actions…

To successfully Attack a territory, you must have more strength than the territory you are attacking. Attack and Defensive strength can be bolstered by adjacent territories not separated by Rock Barries. If adjacent territories are occupied by players other than the Attacker and Defender, they can choose to join the attack, join the defense, or remain neutral. Bribery can help you here!

To take a Scavenge action, draw 1 card from the Scavenge deck and reveal it to all other players. Place any Scavenge card that is not used immediately face up next to your Tribe Card.There are 2 types of Scavenge cards – Map Scavenge and Tribe Ability. When you draw a Scavenge card, follow the instructions on the card.

Battling for a territory is often necessary to secure an advantage, but the water debt you incur if you succeed may prove a valuable boon to the loser. So sometimes it is wise to Scavenge instead and take your chances. Whether you get valuable help or not, items in the scavenge deck are never harmful. You may find that what you draw from the Scavenge deck greatly influences your decision to ship or attack for your second action. Picking territories wisely will play a big part in securing your victory. Territories which contain Resource Production Sites are crucial because they produce the materials from which stillsuits, crysknives and ultimately sietches – the requirement for winning – are fashioned. Locating your first worm is also important as it serves to protect your nearby assets and threaten neighboring territories. To win, the player(s) must control the winning number of Sietches at the end of the Action Phase, or by unanimous decision of the Council. For a Sietch Win, single players need to control 3 Sietches to win, while players in an alliance need to control 5 Sietches between them to win.

Will your tribe rise to the challenge and survive, or be lost to the sands of time?