“Listen up Marines, Here’s the situation.  The terraforming colony on exomoon LV-426, Hadley’s Hope, has unexpectedly broken contact.  Weyland-Yutani Corporation, in conjunction with the colonial marines, is sending you to the binary system of Zeta Reticuli to find out what happened…”

The Aliens: Another Glorious Day in the Corps game is a quick to learn, dynamic co-operative survival boardgame where you and your team of specialist Colonial Marines will gear up with serious firepower, and head into the strangely abandoned facility of Hadley’s Hope, looking for survivors, and answers…  You soon discover you are not alone… As you explore the rooms and tunnels, you’ll need to work together, keep your cool and stay frosty to fight off relentless Xenomorph ambushes, and get out of there alive…

Playing iconic characters, explore different areas of the facility, with mission goals to move forward through the central campaign recreating scenes from the movie, starting with the discovery and rescue of Newt! Or indulge in stand alone “Bug Hunt” missions. Everything you need is contained in this starter box 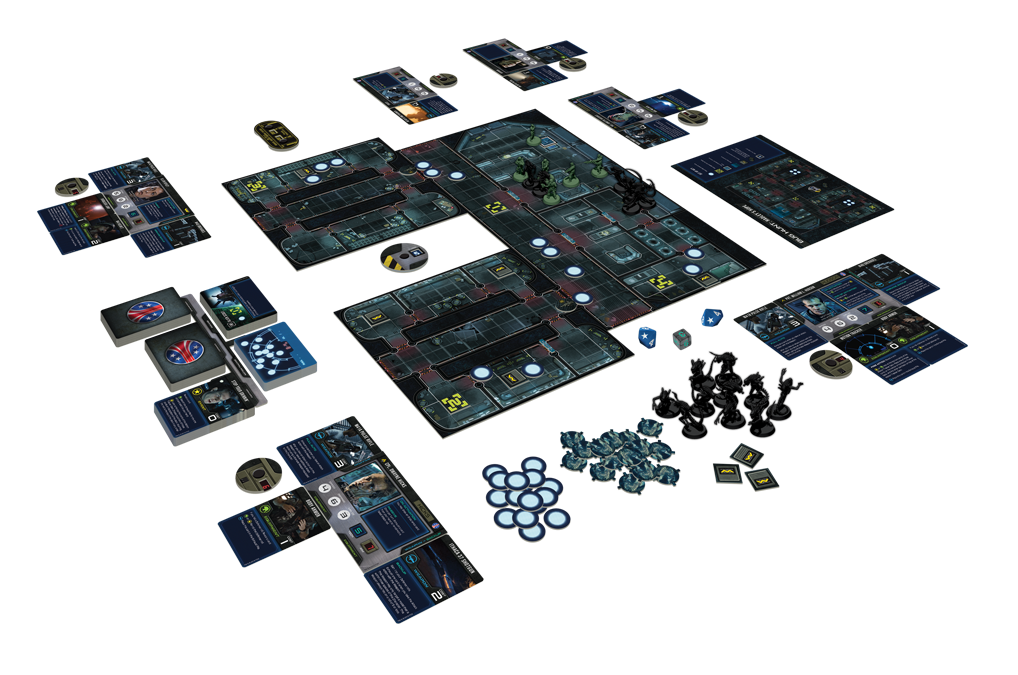 Whether you’re in it for the long haul of the central campaign, or getting down and dirty in a bug hunt your mission card will show how to set up the board for that particular scenario, victory conditions, and any special rules in play, so pay close attention to these!

There are 4 reversible game boards that are used to create the various scenarios in the missions, each mission card has instructions on how to set these up for that adventure. 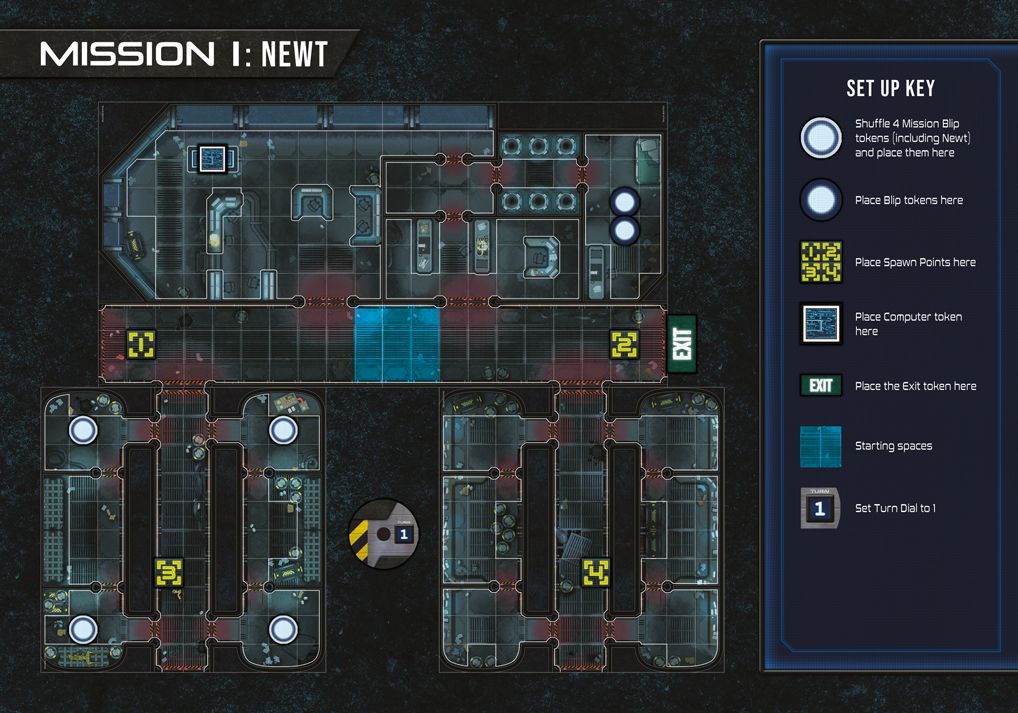 In Aliens: Another Glorious Day in the Corps you get to take the role of several iconic characters, marines or civilians, Vasquez, Hicks, or even Ripley.  Each of these have a card containing all of the information you need, and a detailed miniature to play on the board.

Each character card has 2 sides, the Hero, and the grunt. Each player controls one hero character and their corresponding miniature, utilising the Hero stats, special abilities and rules. Marine Heroes also have a rank, which determines their play order, and number of grunts controlled by that player.

Any characters not assigned to a player play as “Grunts” using the reverse of the character card, they’re activated by the group, based on the ranks of the marine heroes in play.  If a player’s hero dies or is captured, they may choose a grunt to replace them.  Newt isn’t available until after the first mission, and plays alongside Ripley as either a hero or grunt. 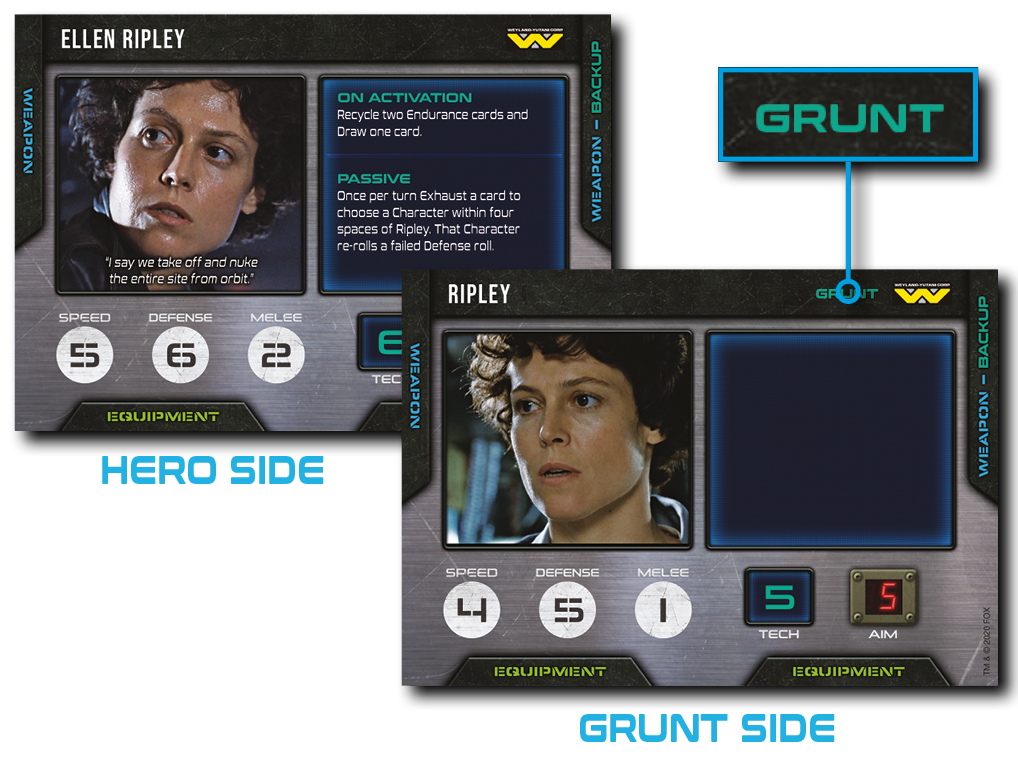 Slots on the character cards for weapons and equipment from the endurance cards, a primary, and a back up weapon at the start of the campaign mission.  Whether it’s cutting the approaching Xenomorphs down in a hail of ammo from an M41A Pulse Rifle, or blasting them into next week with the Ithaca 37 shotgun…Equipment options include Helmets and body armour, which all help keep your hero alive. 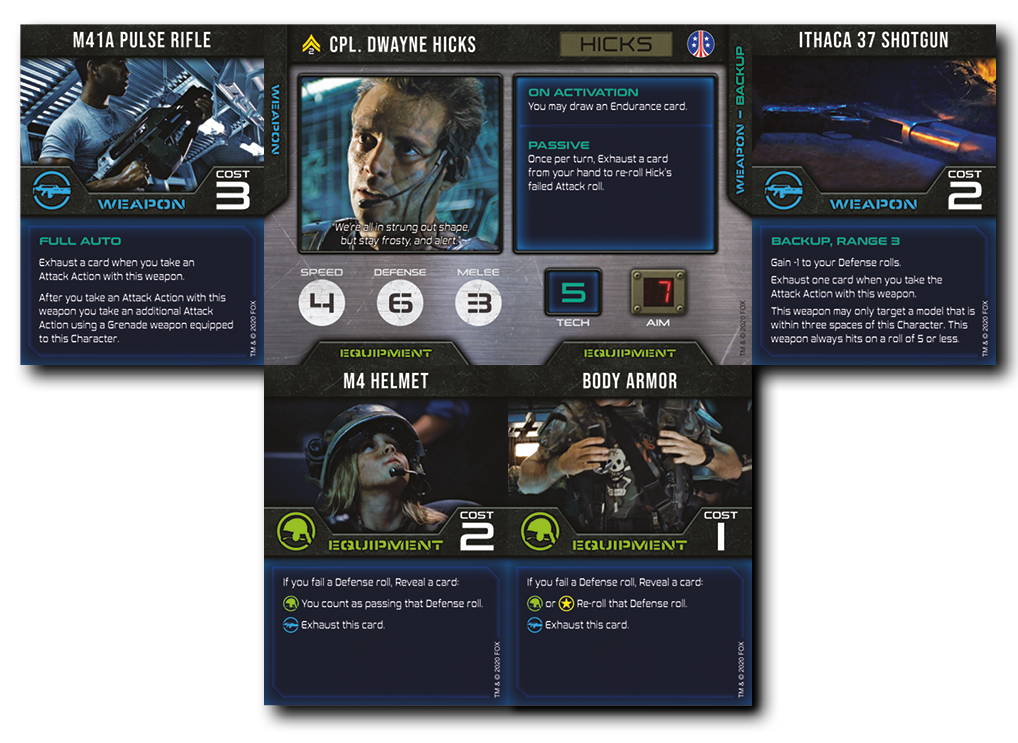 The Endurance Deck is THE critical resource that heroes will draw on during the game to track ammo, resources and the survival of the group.  Containing Weapons, Equipment, Event & Hazard cards, each with instructions as to how and when they are played.  During the game, cards move from the Endurance Deck, to the Exhaust Pile, and vice versa… This is crucial to maintain, as the  beneficial cards available reduce between each mission, whilst the Hazards do not… If this deck runs out, it’s Game Over Man…

So who controls the Aliens?

Xenomorph presence and location is announced by blip tokens and spawn points, how MANY of them however is denoted by the threat levels on the Motion Tracker Cards… ranging from 2 blips to an Alien swarm… When a blip is spotted it’s flipped to show how many rampaging Aliens are entering the game, and becomes an Alien miniature figure, with the singular goal of destroying every living soul in the mission… 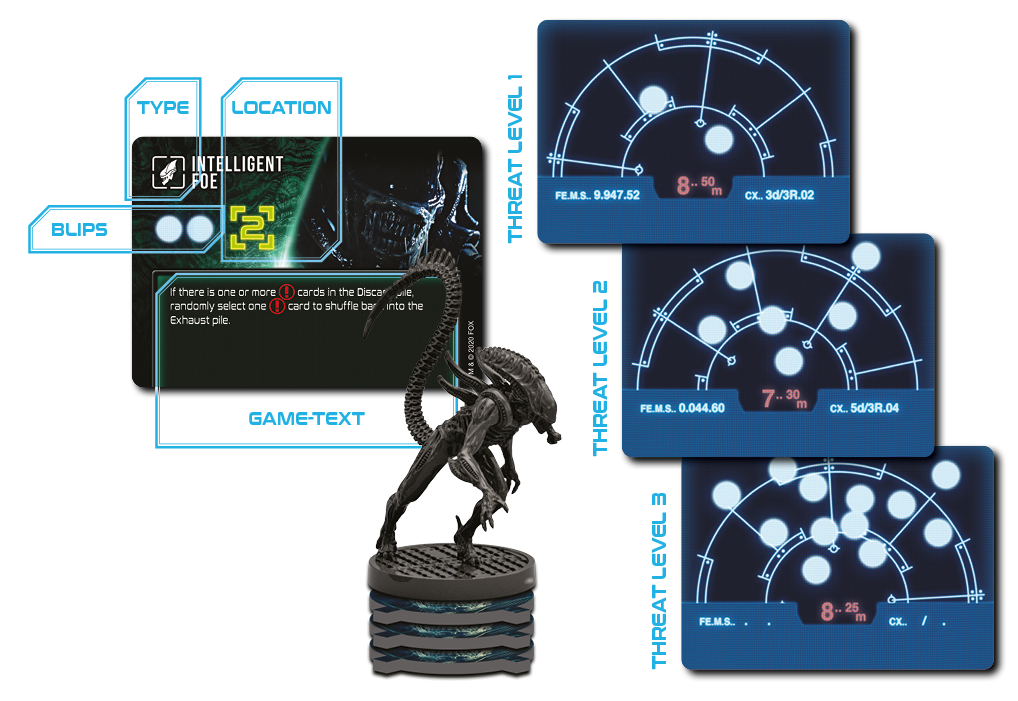 They activate and move during the Alien Phase of the turn once all the characters have completed their actions. They move automatically & relentlessly towards the Heroes, if they survive the defensive fire, the embattled character will roll for defense/counter-attack, and match the result against their stats to gauge the success…

If the defense fails, they get knocked down, if the player rolls a 10 or more, it’s Game Over man… they die and are removed from the game….